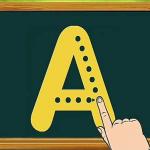 Education-emphasized games are all the rage right now since many parents are looking for fun games that can be educational for their kids. Take a tour around the ABCya XYZ and pick out your kid's suitable game choices from the list of educational games! One of the most outstanding options is Dotted Alphabet for kids. The goal is to trace the patterns and fill all the bubbles with the right words. As you start the stage, the alphabet slowly tumbles onto the screen, that's when you can start choosing the letter to warm up the game.

A tip for the new players is to go with the easier letters such as "L", "I" or "M". The first letter is crucial for the process later in the game since the players are required to accurately trace the patterns. This kind of game will have the players focus entirely to figure out which bubbles they should fill in first. Once you have gotten the hang of the easy letters, it's time to take on the more complicated ones.

Time will be your enemy as well since there is a limited amount of time for each stage. Once you finished the words, the game will teach you another new word starting with that letter. Such a newly updated feature can only be found at https://www.abcya.xyz/! Let's see if you can cover all 26 letters in a short amount of time! Play more games with educational purposes such as Yatzy and Tiles Of The Unexpected

Controls: Click the mouse to line up the words.