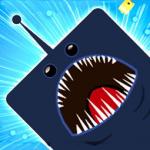 Welcome to the mysterious sea world in the new IO game Deepio! Explore deep waters in the role of one of the marine inhabitants. You can enter a game like fish, blobfish or a worm, but then you have to evolve your character into bigger and stronger sea creatures. To make a mutation possible you have to swim around the sea and eat small glowing dots or other players, as soon as you collect enough experience points your character will turn into another animal and go to a higher level. Every animal in Deep IO has its unique abilities and needs. Some animals can only swim deep under the water and going up kills them, some of them can dig in the earth, some can poison opponents, and some others become invisible, but they all have one thing in common: they eat or get eaten by others, so don't just float around!

To kill another animal and eat its remains you just need to hit it with your head several times. You only have a chance to win by hitting smaller players or those who are at the same level as you, but not those of the same species. The bar above other players is health, if the whole bar turns red - animal will die. If you are hit by someone stronger than you, you'll get 15% slower for 5 seconds. Other important things you must also pay attention at are oxygen, temperature and pressure level bar, once the level of one of these things starts dropping - you are in danger!

Control your character by moving a cursor and click the left mouse button boost. In Deepio players can also communicate with each other and share their opinions about the game, press ENTER to chat, to hide or show chat messages -press M. Exit to main menu by pressing ESC. You can also become invisible for other players and just swim around watching others playing, to do that press 'SPEC' button on the start screen. In this mode other players can't see you until they say the magic phrase.